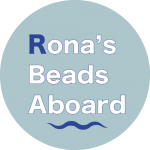 Agate is the obvious stone for autumn jewellery. It forms by filling a cavity in its host rock, known as a geode. The result is round nodules, with bands like the rings of a tree trunk, looking like eyes, often with crystals in the centre. Rock Crystal, Amethyst and Citrine are just a few crystals that are found in the centre of a geode.

The necklace shown is Botswana Agate which is always shades of browns.

Agate was highly valued as a talisman in ancient times and has been used as a traveler’s amulet for centuries. It’s believed to bring fortune, health, wealth and long life. Some call its strange patterns ‘cosmic caterpillar tracks’. Others’ swear that wearing these beads can heighten the spiritual consciousness and balance the body’s physical and mental states.

Previous: Labradorite, what is it?
Next: Citrine, Birthstone for November

I worked in Jewellery retail for many years, passing my Gemmology exams in 1993 making me an F.G.A. This gave me a passion for gemstones and all their fabulous colours. Around this time I also learned the art of pearl rethreading, which I still do for some of the jewellers in my local town. In 2014 I rented out the house and, along with my partner, bought a wide beam canal boat to travel the UK canals and waterways. I registered as a roving trader, so we can now set up shop wherever we think a mooring place is busy enough and take part in organised floating markets. I hope you enjoy following my blog.

All items are handmade to order,please allow time for this. Do bear in mind all gemstones are natural patterns, therefore gemstones used for the item chosen may differ slightly from the image. Great care is taken to ensure colours are photographed as true as possible.
Postage is included in the price
(UK mainland only).